Angels in the Catholic Catechism

I fully understand Father Linsky’s comments about the time he spent studying about angels before our October 2 MPG meeting. After all, here it is eight days later before I post anything. It’s not an easy subject. I started out looking at all the approximately 500 uses of the Hebrew and Greek words often translated as Angel in English Bibles. That is a long list and is complicated by the fact that the words are sometimes translated as “messenger” instead of angel. Sometimes they are used in the phrase, “messenger of the Lord” and I’m wondering if that is synonymous with angel.  So I gave up on that approach and am going to focus on the Catechism to try to be sure I don’t stray too far from Catholic tradition.

If you aren’t using the Vatican online Catechism, you are missing a wonderful resource. I usually begin with this alphabetical word list index which is found at: http://www.vatican.va/archive/ENG0015/_FA.HTM

If you are interested in angels, just click on the A and get a list of all words found in the Catechism beginning with A. Scroll down till you find angel. Here is the section that includes angel and angels as well as other curiosities such as Anglicans and andmultiply. Oh well, I guess that proves the Vatican, or at least their programmers are not infallible. By the way, the word Anglicans shows up only in a footnote for some document by John Henry Cardinal Newman. From this list we also learn that the word and shows up 7,930 times in the Catechism. It would be 7,931 without the following concatenation error.

Since angels is found 60 times and angel only 24 times, I clicked on angel to get this list of the 24 instances, all with hot links. 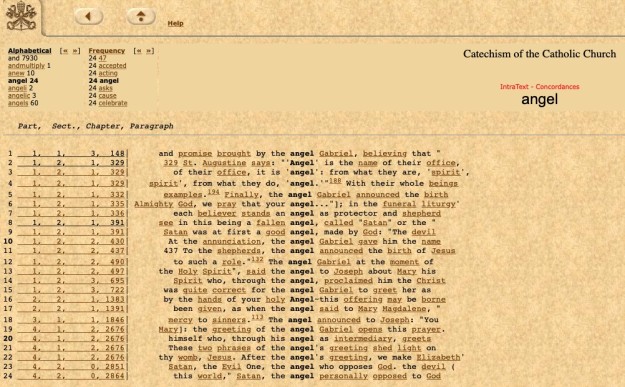 Looking over the list, it is easy to see that there is a lot of information about angels in 329. Clicking on the first of those, we learn that 329 is in Paragraph 4 on the Creeds and references the creation of heaven and earth in the Apostles’ Creed and of all that is seen and unseen in the Nicene Creed. So, angels are part of the creation. Below is copied the section on the Angels, the teaching of the Catholic Church. Please enjoy it.

The existence of angels – a truth of faith

328 – The existence of the spiritual, non-corporeal beings that Sacred Scripture usually calls “angels” is a truth of faith. the witness of Scripture is as clear as the unanimity of Tradition.

330 – As purely spiritual creatures angels have intelligence and will: they are personal and immortal creatures, surpassing in perfection all visible creatures, as the splendour of their glory bears witness.190

Christ “with all his angels”

331- Christ is the centre of the angelic world. They are his angels: “When the Son of man comes in his glory, and all the angels with him. . “191 They belong to him because they were created through and for him: “for in him all things were created in heaven and on earth, visible and invisible, whether thrones or dominions or principalities or authorities – all things were created through him and for him.”192 They belong to him still more because he has made them messengers of his saving plan: “Are they not all ministering spirits sent forth to serve, for the sake of those who are to obtain salvation?”193

332 – Angels have been present since creation and throughout the history of salvation, announcing this salvation from afar or near and serving the accomplishment of the divine plan: they closed the earthly paradise; protected Lot; saved Hagar and her child; stayed Abraham’s hand; communicated the law by their ministry; led the People of God; announced births and callings; and assisted the prophets, just to cite a few examples.194 Finally, the angel Gabriel announced the birth of the Precursor and that of Jesus himself.195

333 – From the Incarnation to the Ascension, the life of the Word incarnate is surrounded by the adoration and service of angels. When God “brings the firstborn into the world, he says: ‘Let all God’s angels worship him.'”196 Their song of praise at the birth of Christ has not ceased resounding in the Church’s praise: “Glory to God in the highest!”197 They protect Jesus in his infancy, serve him in the desert, strengthen him in his agony in the garden, when he could have been saved by them from the hands of his enemies as Israel had been.198 Again, it is the angels who “evangelize” by proclaiming the Good News of Christ’s Incarnation and Resurrection.199 They will be present at Christ’s return, which they will announce, to serve at his judgement.200

The angels in the life of the Church

334 – In the meantime, the whole life of the Church benefits from the mysterious and powerful help of angels.201

335 – In her liturgy, the Church joins with the angels to adore the thrice-holy God. She invokes their assistance (in the Roman Canon’s Supplices te rogamus. . .[“Almighty God, we pray that your angel…”]; in the funeral liturgy’s In Paradisum deducant te angeli. . .[“May the angels lead you into Paradise. . .”]). Moreover, in the “Cherubic Hymn” of the Byzantine Liturgy, she celebrates the memory of certain angels more particularly (St. Michael, St. Gabriel, St. Raphael, and the guardian angels).

336 – From infancy to death human life is surrounded by their watchful care and intercession.202 “Beside each believer stands an angel as protector and shepherd leading him to life.”203 Already here on earth the Christian life shares by faith in the blessed company of angels and men united in God.

That is a lot of information, so I’m quitting for now, even though fallen angels show up in 391-395. I hope some of you will enjoy poking around in the Catechism looking for treasure.

Enter a word to search this blog.